Fellowships at the Aga Khan Program for Islamic Architecture (AKPIA) at Harvard University
Both funded and non-stipendiary fellowships are available. The deadline has been extended to April 1. More details on the AKPIA website here.

Call for papers for the AAS-in-Asia Conference to be held in New Delhi in July, 2018. For details here is the conference website.

Call for papers for the European Association for South Asian Archaeology and Art Conference in Naples, Italy, 2018. For more details see here. You can watch all the short videos in the series here.

Workshops and talks
Mysore University's Department of Studies in Ancient History and Archaeology is organizing a three-day workshop (pdf) on temple architecture and iconography from 9 to 11 October, with discussions on engineering, iconometry, and iconography. Interestingly, there is also a sculptors' camp being set up from mid-October to mid-November where ten sculptors will create new work inspired by Chalukya, Kadamba, Hoysala, Gupta, and Pala, styles. 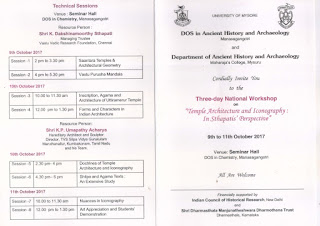 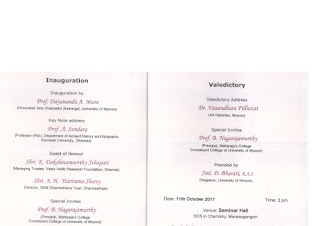 On Wednesday, 11 October, Prof. Chris Hale of O.P. Jindal University will be presenting a paper titled "Putting 'People' Back into 'Pots'" at Jawaharlal Nehru University, New Delhi. His work is on Greek Bronze Age ceramics, and he will be discussing ceramics broadly as indicators of social change and inter-regional interaction. 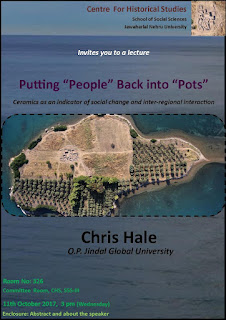 A seemingly previously unrecorded Saivite temple has been reported from Pudukottai district, Tamil  Nadu. The temple bears Chola and Pandyan inscriptions. You can read the story of how three young history enthusiasts chanced upon the temple here.

In Telangana, a sixth century temple was discovered in Devunigutta. You can read the report here, which also seems to draw a connection with the style of architecture found in Cambodia's Angkor Wat.

At an excavation at a Neolithic site in Mizoram, ASI officials report the discovery of sculptural representations of Ganesha, Kalki, and Makara. The article does a fairly good job of putting this discovery into context, lest readers jump to conclusions about the presence of Hinduism in the region in the past.

The hunt for the "Ram Setu" (a man-made bridge supposedly connecting the Indian subcontinent and Sri Lanka, referred to in the epic tale Ramayana)  has been resurrected through a proposed collaborative project between Indian and Sri Lankan underwater archaeologists. A profile of Dr. Alok Tripathi, the man on the mission can be found here. For earlier iterations of this debate, including UPA government proclamations on the issue, see this.

Through the Salsette Exploration Project, students are documenting archaeological artifact found on the streets in Mumbai, a fascinating example of surveying modern cities, not generally considered pliable territory by archaeologists. 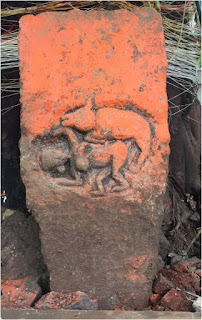 One of the two gadhegals or Ass-Curse stones in Chandivali's Vagheshwar Mandir. The unpainted portion was buried in the soil before archaeology students unearthed it. Image source.

Miscellaneous
A recent article in The Hindu discusses the shadowy world of idol smuggling in India. See the whole article here.