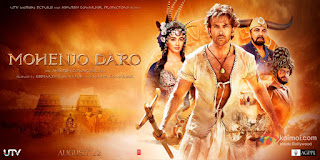 I was so looking forward to seeing the movie Mohenjodaro - as one instance where a fascinating ancient civilization (and one we know solely from archaeological evidence) was adapted to the Bollywood scene. However, Mohenjodaro is merely a very poorly conceptualized backdrop set to a very average love story (when, oh when, will we stop making love stories for the sake of love stories?). The central question in my mind is this: why Mohenjodaro? The story could have fruitfully been placed in any modern-day context to much better effect.

The first thing to talk about is historical accuracy. It seems that the writers have lifted random pieces of archaeological evidence and disposed them as random props in their own imaginary storyline. At some point Hrithik in an interview said that he was not concerned the historical accuracy of the film but that it was meant to be entertaining and not a documentary. And that is certainly one way of going about making a period drama - pick and choose scattered concepts and artifacts that will look impressive on screen (unicorns, seals, large cities, foreign traders) and weave it with random fluff (moon worship, finding 'mates'/sanghinis, river goddesses, lost heirs), clear historical inaccuracies (the complete destruction through flooding of Mohenjodaro) and ideas that will resonate with a modern audience (river worship, good vs evil). On the other hand, Gowariker could have made an actual period drama, bringing the ancient civilization on the Indus to the forefront, paying some attention to the vast amount of information we do have. It needs to be emphasized that despite the lack of historical texts for the period (the Indus script has not been deciphered) generations of archaeologists have worked on reconstructing various aspects of the Indus civilization and there is a rich literature on the topic.


Given the amount of hype generated about the movie and the fact that it is set in this ancient context, I can only consider the lack of attention to detail and historical accuracy as lazy film-making. Other reviewers (here and here) have talked about some of these inaccuracies and flights of fancy: the use of heavily sanskritized Hindi (Indo-European languages like Sanskrit were a later entrant into the subcontinent); weirdly elaborate (and likely anachronistic) headdresses and costumes that at times look like Roman tunics and togas; the presence of the horse (there is no unambiguous archaeological evidence for its use in this period, although this IS neatly explained away by mentioning that they are strange beasts imported from central Asia)[1]; worship of a mother-goddess like figure who is the personification of the River Indus / Sindhu and of the unicorn as her mount; the burning of the dead (extensive cemeteries and graves have been identified and excavated at Indus sites; see here for a typical burial); the destruction of Mohenjodaro due to a flood caused by the breaking of an upriver dam (this used to be one of the theories for the decline of the Indus civilization but due to a lack of evidence it is no longer widely accepted); a mass migration eastwards to the Ganges by the population that left the Indus area (yes, there was some movement east but there likely was some change in the population as is clearly evidenced in changes in material culture) [2] etc. and etc. I realize I am nitpicking but as an archaeologist and a historian these inaccuracies mark the difference between a great period film and a typical Bollywood fluff piece. The saving grace could have been the cinematography which also disappoints. What could have been a visually dazzling film (think the sweeping vistas of the Indus, the wide flood plains, the crowded ancient city, home to hundreds of thousands of people) is hampered by poor CGI and clumsy sets that resemble nothing as much as amateur Sketchup animations and the generic Bollywood village/ fantasy kingdom set.

And that brings me to the story (spoilers ahead).....


Enter Hrithik/Sarman...in brownface (browner face?). Unlike his usual Fair and Lovely screen persona, Hrithik is shown as a rugged (and brown) villager, wrestling crocodiles inn the river near Amri, a small village at some distance from Mohenjodaro. Plagued by dreams of a unicorn that looks meaningfully at him, he dreams of going to Mohenjodaro to trade the indigo and earthenware animal-shaped whistles the village produces/makes. Despite his aunt and uncle trying to dissuade him, he sets out on a trading mission, carrying with him a copper seal of a unicorn, to be used only in a life-or-death situation, his uncle warns. Accompanied by the village buffoon, er... best-friend, he reaches the city Mohenjodaro (whose emblem is a unicorn), pays tax (what is this tax for, asks Hrithik unhappily. We too want to know why taxation is bad. No answer is given) and sets up shop. He is then disillusioned by the greed of the people of Mohenjodaro, as exemplified in that some traders refuse to pay full price for his indigo (only 8 sacks of wheat and not 10, they say. Ok, says Hrithik) and he witnesses the Head of the Senate's son bullying traders, underpaying for their goods and lasciviously eyeing their women. It is no wonder then that he is all set to escape from the 'impure' air of the city. But then, the twist....


Love! He sees the Chief priest's daughter gently sashaying through the streets of the city and instant love occurs, on his side at least. Pooja Hegde is an eminently forgettable epitome of blank prettiness, whose acting seems to consist of a look of wide-eyed wonder and deadpan dialogue delivery interspersed by miniscule facial movements meant to show sadness, anger or surprise. I guess this blankness is a perfect foil to Hrithik’s patented expression of red-eyed trembling anger/sadness. In a convoluted and ultimately pointless storyline, she is supposed to be the harbinger of change in Mohenjodaro due to the death of her mother at her birth and is informally betrothed to the son (Munja) of the head of the governing council. The head of the council or Maham (Kabir Bedi) is portrayed as a venal dictator, who had been expelled from the competing city of Harappa for smuggling, only to come to Mohenjodaro to take over the council as a quasi-dictator in an unexplained way. Here follows a complicated tale of revenge and greed and betrayal that ultimately plays second fiddle to the lukewarm love affair between Sarman and the wide-eyed wonder (WEW).

On the one hand, the Maham, who has managed to build a dam on the Indus to divert the water to access a huge source of gold (shown as fist sized gold nodules being panned from the river bed), is intriguing with the traders from Makkan to get copper weapons in exchange for gold so that he can defeat the Harappans who insulted him. To this end he also excessively taxes the people of Mohenjodaro and has a mercenary army of some sort of tribal people (dark skinned, hairy, animal pelt covered caricatures). On the other hand, his son Munja seeks to hasten his union (‘mel’) with WEW due to new that she is cavorting on the streets with Sarman. In this he does her injustice since she does not indicate by even the slightest twitch of her face that she has formed an undying passion for Sarman. On the day of the moon festival at the Great Bath (don’t ask) lovers are supposed to declare their love to their mates (sanghini), Sarman cunningly disguises himself with a judicious application of red eyeshadow and a horned turban to sneak into the Upper Town and indicate (through song and a strange animal dance) that he considers WEW his mate. In an ultimate display of wishy-washiness she kisses Sarman but then expressionlessly declines to plight her troth to him (‘it cannot be’, she says, ‘I am promised to another for the good of the city and the promise of my father….blah….blah’).


Sarman is, not surprisingly, caught in flagrante delicto and sentenced to some sort of trial by combat. At this point WEW’s father reveals that Sarman is in fact, the son of the previous head of the council who was murdered by the Maham. Sarman then defeats a pair of Tajik cannibals to gain the unanimous support of the masses, who overthrow the Maham and his men. Munja ends up killed by Sarman after trying to kill WEW (who manages to remain expressionless through a strangling episode) and the whole gold for copper weapons plot is exposed. There is a whole lot of drivel about unity and serving the people vs ruling the people and Sarman tells the people of Mohenjodaro to rule themselves (because khap panchayats are such a good idea). Meanwhile, ominous thunder rolls and heavy rains cause the dam to overflow and then break. All Sarman’s crocodile wrestling expertise comes into play as he sets up an impromptu bridge of reed boats across the river to lead the entire population of the city to high ground. ‘Bring the cows’, he say, ‘but not the carts’. The Maham and the city are washed away.

The entire population of Mohenjodaro then migrates and reaches ‘pure’ water that Sarman (after seeing a benign unicorn) names the Ganga. WEW hugs Sarman. Maybe she is happy, maybe not. Who knows? Who cares?


[1] For a discussion on the presence or absence of the horse in the Indus Valley see this.

[2] Simply put, toward the end of the Indus civilization (about 1500 BCE) people started using different things, designs changed, the ways cities were built changed, the Indus script was forgotten, trade networks changed, big cities were abandoned, a new language was introduced. We do not yet have all the answers for why this happened but it is unlikely that the entire Indus population simply migrated to the Ganges. There is considerable debate on the Aryan question, although most serious archaeologists argue that there was some sort of movement of people from Central Asia in this period.

Email ThisBlogThis!Share to TwitterShare to FacebookShare to Pinterest
Labels: Reviews